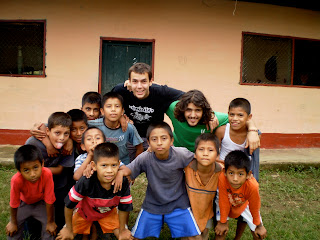 During the 21 years that Caleb Winship and myself (David Kando) have spent on this Earth we have always been very “different”…. It might have something to do with the fact that we have traveled or worked in 27 countries including every continent except Antarctica and Australia. Since we met at Northeastern University 4 years ago, we have helped build schools in the Dominican Republic with a grass roots student run NGO, worked with multinational sustainable development organizations like the Deshpande Foundation and Northeastern’s own Social Enterprise Institute, studied Spanish and International Business in Spain and Mexico, and been given the opportunity to create our own internships by the school’s international co-op department. We are part of a well-respected International Business program where in our graduating class of 2013 over 30 students chose a sister-school in Spain and 3 of us chose the sister-school in Mexico (Caleb, myself, and 1 peer.) Caleb and I specifically chose to be in Latin America to work in sustainable development and encounter opportunities like the one we’ve shared with Li Ch’utam during our last 6 months in Alta Verapaz, Guatemala. More specifically for all the lovely Guatemalan people reading this: 4 hours from the capital in microbus to Coban, 4 more hours to La Tinta, quick bus to Teleman, then a 10 minute ride in the back of a pickup to Nueva Mercedes. Purrrroooo Poloochic…..

I don’t think it came as any surprise to our University when we told them we were going to Guatemala to live in a tropical rainforest for 6 months. Nor when we added that our house would be in a community of plantations where the average 15 year old has 2 children and the majority of children enter the work force at 14, unable to read or write Spanish with their 6th grade education.  Not only were they not surprised, they were extremely generous with scholarships and marketing Li Ch’utam’s efforts in the United States. 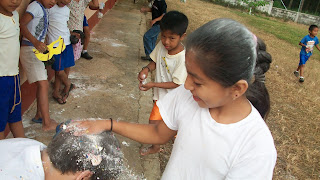 It was Guatemalans that were surprised when Caleb and I explained what Li Ch’utam was, where we would be working, and what we would be doing for the next 6 months. From the official meetings with politicians and businesswo/men in the city and less official conversations on 8 hour bus rides through hills and valleys of beautiful Guatemala no one was betting that they would see our faces again apart from that first conversation. To their surprise, “the two gringos from the Polochic” showed up like clockwork every first of the month in the city to relate the latest and greatest news from Li Ch’utam in the Polochic Valley and see how the urban reform projects by government and private businesses groups were progressing and when the next collaborations between the pueblo and the city would be taking place. We began by relating our horror stories of the local rural education systems over lunch with the who’s who in national educational reform. As the months went by we stopped losing time in the negatives that everyone had been talking about for years and started to talk with people like Campus Tec, Ashoka, the Pirate Party, and the U.S. state department about real solutions to these problems and different steps we had taken at Li Ch’utam to address grave issues in the rural education systems.

Li Ch’utam itself is a blessing to the Q’eqchi people who live in the Polochic among a sea of foreign owned super-plantations and cash crops.  Of all the corporations and wealthy foreign and central American families that own land in the valley, the majority don’t care very much about their workers or their worker’s kids (future employees.)  In fact, most owners just visit their plantations once in a blue moon to see the money machine ticking away and then they whisk away their families to some giant house in a more relaxed climate with a better school system. This is where one very special family of German plantation owners and Li Ch’utam steps into the picture.

Hugo Droege came to Guatemala before World War 2 in search of a better life for his family. Not your typical modern plantation owner, Hugo was known for carrying just his safari hat and walking stick around the uninhabited jungle chopping down piece by piece of dense rainforest with his team of workers he convinced to come from various corners of the country. Speaking the local Mayan Q’eqchi language and being in the field with his workers every day Hugo is a legend in the area for his kindness, work ethic, and his ability to build a business that his children would come to run for generations.  The Droeges are famous for always living in the Polochic in the same rainforest as their workers (no doubt the houses are built to slightly different specifications, but the Droeges by no means live like the other plantation owners of the area) and having their children grow up alongside the children of the Q’eqchi people who work the fields. This relationship between the children is where Li Ch’utam all began some 25 years ago with our boss Henning Droege (grandson of Hugo.) Henning was a smart, dynamic child who could balance a spreadsheet and navigate a horse through a densely forested hillside…probably at the same time.  All of his friends would run through the jungle with him and play with the animals and spend hours talking to Henning about dreams and the future. And this is where Henning started to notice that his future was destined for other things than that of his peers. At 12 years old, Henning was dreaming of a life of airplane rides to Europe, a multinational education, and a future as a diplomat. His peers were looking to finish their education in the next 3 years, start working the fields, and making a family next door to the house they grew up in. Memories of these drastic differences in education and opportunity never left Henning even as he achieved his dreams of being a diplomat and studying in prestigious European Universities.  Now a young adult, he rallied behind the pre-existing organization and goodwill of the Droeges and decided to create Li Ch’utam. A sustainable development organization that provides diverse education and work opportunities for the youth of the Polochic Valley. Li Ch’utam not only provides opportunities to a group of people living in the Polochic Valley, it is addressing serious issues that exist in communities and on plantations world-wide.

Technological advancements eliminate jobs on plantations each year with more and more man-power being converted to machines and more efficient strategies. This poses a serious threat to families that have on average 7 children. Out of these 7 kids, it’s rare that 1 will learn to read and write and find work outside of the valley. If every family has 7 kids, and less and less jobs are required on the plantation every year, and no one can find work elsewhere because they can’t read or write….you can see where a problem might arise concerning future local job opportunities.

For the last 6 months, Li Ch’utam has provided support to any child who needs help with homework and can’t find support in the household. We have the first public library in town which is open to any child or adult. You would never know how useful an atlas could be until someone who asks you, “What’s Mexico”…and when you reply, “It’s a country close by.”…they say, “What’s a county?” This is even scarier when the person asking is 1 of 3 lucky kids in the whole community who is enrolled in middle school, the other 30 having already ended their education.  We offer computer classes and typing courses which 18 youth took part in. Many of these 8-13 year olds couldn’t recite you the alphabet 6 months ago. After a few months of typing lessons, with the keys completely covered they can not only type flawlessly, they average 12 words per minute. One 13 year old is training to be the first local Li Ch’utam volunteer: he can type at 35 words per minute, cooks meals for the other kids, takes care of the garden, gives typing classes, and teaches the other students Math, Science, and Geography with Encarta Encyclopedia. He’s been out of school for the last 2 years, he never met his parents, and his grandparents don’t have the money to send him to 7th grade. Kids like this have a mountain of potential and no one to lend a hand to meet them halfway. Li Ch’utam is here for them and is proud to offer people like this a chance to learn more about the opportunities that surround them. Lucky for him, he will receive our first scholarship, and with a little luck and a lot hard work Li Ch’utam will grow to offer more and more opportunities to those willing to put in the time and effort for a future not reliant on the plantation. 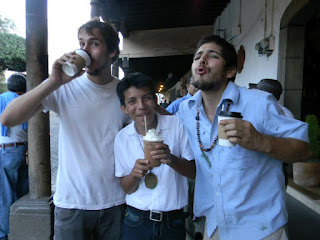 Contact info@lichutam.org for any requests for more information, for collaboration or job opportunities, or to inquire how you can help our scholarship fund with monetary or technological        donations.
Posted by Li ch'utam at 12:29 PM 1 comment: