Few words from Astrid before leaving Mercedes:
“The beginning was a bit difficult for me as I wasn’t speaking Spanish fluently, it was my first experience in volunteering and spending so much time outside . There were so many people, hot weather and I felt lost. The first week I had to get used to hot weather, food and I was really afraid of animals/insects, especially spiders. But now I know that you can get used to everything (even if you have arachnophobia you can live with spiders under one roof). The children did a very nice welcome and accepted me from the first day. The people in general were very nice for me. Little by little we started working together with Ewa and we got used to living here and every day life was just continuing naturally.
It was nice to work with Ewa, share ideas, feeling as a part of the team and doing things together but also being responsible for some activities.
The best moments were when seeing the kids laughing. Even though they are lacking many things they seem soooo happy. The most incredible is that they spread the happiness easily to everyone around like an “air diseases” and even if you were angry for them a minute ago now they make you happy and you love them with all your heart.
There are some issues/things to improve in Li Ch’utam as it is still a developing organization. The good thing is that it’s a small, grassroots organization and works with people directly and we can see effects of our work quickly (sometimes we see the kids progress even week to week).
I liked to see that there are people especially young people here who want to be involved in the life of their community and I liked a lot to talk and spend time with them.
For me in general it was a very nice experience to meet people, other culture even though it was sometimes difficult to get used to some things like always waiting for people. J But finally I will have a very nice and only positive memories out of this experience. “
Astrid 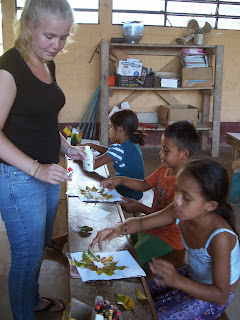 Thank you Astrid for your presence in Nueva Mercedes, your excellent work with kids, patience, ideas and commitment to the organization. 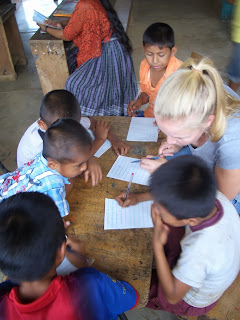 I really loved to work with you as I could always count on you and share my thoughts. Living together and spending free time with you was a great pleasure. I hope that you’ll be in touch with Li Ch’utam and can come back one day to see the changes in the community. I remember when at one of the meetings one mother said: “Dile a Astrid que no se vaya!”. Debora, one of our young volunteers said today that she couldn’t sleep Friday night and was crying because she got used to Astrid so much and she treated her like an older sister.
Posted by Li ch'utam at 4:29 PM No comments:

Dodo is on board since one week.
“When I took my last flight from Houston to Guatemala City, I was really stressed, because I knew, things would be different, but when I finally left the airport, I thought it was Napoli instead of Guate. But still this isn't Europe, which I learned very fast, because if something works in Napoli, then it's the road building but in Guate the roads and the drivers aswell are very shitty. And if you are used to European roads and travel on those potholed dirt roads for many hours, you get a feeling of being at the and of the world and to be honest, this feeling didn't change by now, because I think this really is the end of the world. But I like the end of the world pretty much, because it's very pretty. Like the streets, very dirty but somehow awesome. Even though my Spanish is not the best, I am able to communicate with the kids already and playing soccer is also an international language, that everyone gets. I'm looking forward to come back here, after I improved my Spanish in Antigua for a month, so I can exchange more than “donde esta la pelota” or “no tocar mi cabello sin preguntar” and grin silly, when I don't get a word again. But by now I'm really glad to be here, sweating my soul out of my body when I make a step, instead of being in the shitty weather, that Hamburg provides at the moment :)“
Dodo 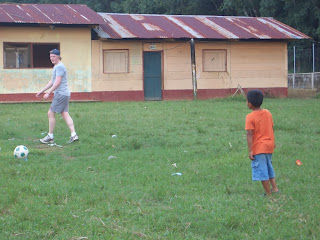 It’s been already more than 3 weeks of holiday activities in Nueva Mercedes. For morning activities sometimes we had no kids so we have decided to reschedule he activities a bit, so on Monday and Friday there are no activities in the morning and the grades from that days join the other days (pre-primary comes with first grade on Tuesday and fifth and sixth grade comes with third and fourths on Thursday). Anyway for morning activities we have maximum 10 kids, which is quite good because we can attend each kid and not so good in the same time because we reach only around 15-30 kids every week with the morning activities. So far we had two weeks of travelling around the world visiting Guatemala, Poland, France, China, Tanzania, showing photos and describing different customs, preparing flags of different countries, dancing polonez, merengue, doing Chinese hat and African mask. 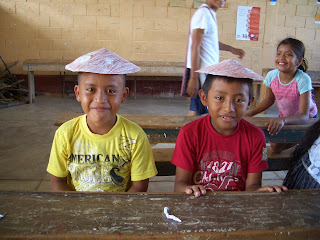 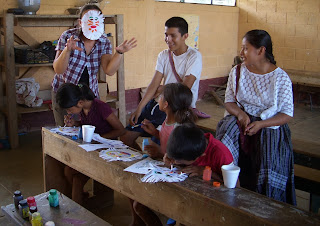 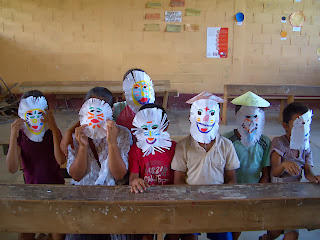 The two following weeks are about nature, so we talk about water: seas, lakes, rivers etc, about water animals and the usage of water, it’s importance and disasters. The same scheme is about wind and earth, including ecology issues, always with manual activities. Kids like a lot manual activities we do with the topics, there are 2 kids who come 2 or 3 times a week for the same activity and each time they are happy to do the same manual activity!

The schedule of afternoon activities did not change. Monday and Friday we have computer classes. The good thing is that we have new participants (from families we have visited recently) and these are young girls (not attending the school any more (age 14 and 15). So they were working on computer for the first time last week. We showed them a bit of basics of computer usage and Word/Libre office so that they can learn a bit how to write. We are also discovering the games available in Edubuntu and trying to put different game each time, adjusting to kid’s level of literacy. We plan to put each time a “topic”, for example writing or math or memory etc. so that each kid does something connected with the “topic” but on her/his level. 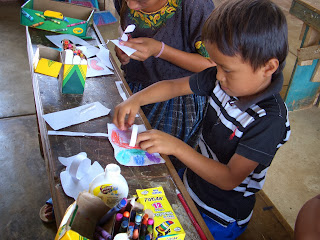 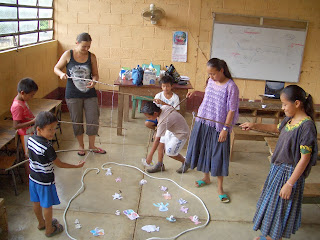 At literature classes (Tuesday and Thursday) we are progressing with Lester, the kid coming every time who cannot read and write, he already knows almost all the alphabet letters and is practicing it on computer classes as well. 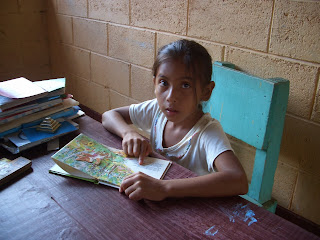 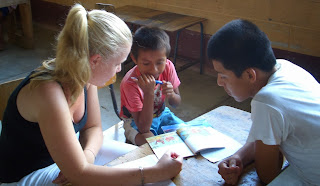 There are more kids from fifth and sixth grade and at the age of high school but not attending school coming for both literacy and computer classes. All together there are almost 50 kids/young people coming for our classes. That means we are reaching almost one third of the kids in the community with our activities. Many kids cannot come because they are working, the older once in the plantation and the youngers at home, some kids live a bit far from school and cannot come alone but still for sure that we could have at least 20-30 more coming.
The nicest view is of course Wednesday when we see 20 faces so naturally laughing watching a movie. J 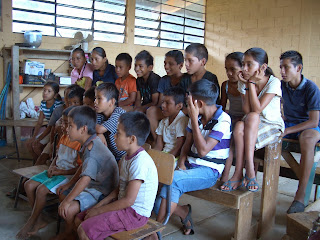 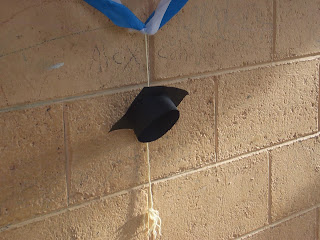 The sixth grade students had a more formal event (for the first time in this school). 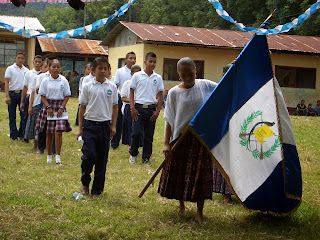 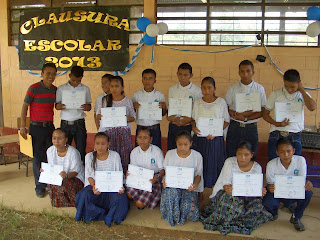 The teachers came two hours later than they should have as it was raining a lot those days and it was not possible to cross the river in Teleman (for the same reason we couldn’t go for shopping on Wednesday). The decoration and programme was prepared half an hour before the event and the event was 1,5 hour late (Guatemalan style :) ). We had our parts in this event: Astrid was IT person, responsible for the music, and I was a master of ceremony. It was not an easy task as we got this information, programme, music etc. 10 minutes before the start of it. But we were happy to help. The last words of the event belonged to Rony, teacher of the sixth grade who congratulated the students and wished them to continue studying. 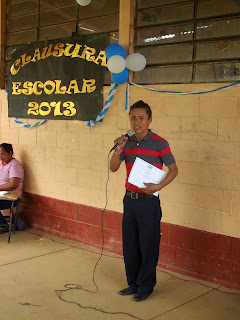