When I first looked for Nueva Mercedes in Maps I ended up with a big interrogation sign on my screen. But Nueva Mercedes exists, and it exists since long. One arrives to the village without rush, slowly but surely, like the women making corn tortillas. It was like a back through trip, where every mean of transportation was smaller and slower than the previous one. A plane which flies at I don’t know how many feet and almost thousand kilometres per hour brought me to City of Guatemala's airport, Guate as the locals call it. 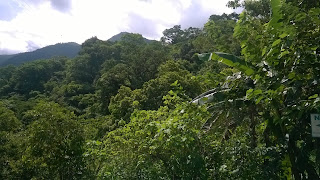 From there, the thunderous engine roar of an old US school bus brought me to San Julián. After some hours we dropped off and took a smaller bus which droved us to Telemán through a pretty bad conditions road for which the money to asphalt never comess. The driver tells us he is from La Tinta, a village nearby connected with the same road, and that he’s asking for subsidies and grants for sport equipment for the school, computers and other stuff. He said he does it for free, because it’s the right thing to do, because it’s for the community. For a moment I saw my own effort growing smaller, when comparing it to the willingness of a man who spends the time he is not driving a bus through dusty roads under a cracking stones sun, helping others. Chatting about this and that we arrived to Telemán. No more pick-ups on Sunday afternoon, so the last stretch was finally done on a tuc-tuc, which engine moaned at every slope of the road to Nueva Mercedes. With my backpack on my shoulders I arrived to the house feeling like climbing a Maya pyramid, mainly because of the tiredness. There was Hugo waiting, the one that together with Filipa was going to be my partner during my stay in Nueva Mercedes.

Through the window of our room the day lean out reddish every sunrise. Little by little the darkness of the night and its sounds fade and the birds' trill welcomes us to a new day. On the way to the school we comment about this and that; sometimes simply engrossed, silently, each one in our morning thoughts.

One by one the pupils arrive, clean and tidy with their satchels, shoulder carried and the impish or shy smiles they bring with them. They put their head out the door, asking for permission to come in:
-              Good morning miss, good morning schoolmates!

Miss Marta is tidy, because she likes what she does, one can notice it in the reflected in her satisfied face when a student answer a question properly. Miss Marta is the third grade teacher, the grade I support, most of times, in the morning. To teach those kids is sort of an art, maybe not understood by everyone, but if one gets from a piece of mud something beautiful by patiently moulding with patient and determination, I can’t imagine a greater contentment.

It is however not an easy task, as the concept of education does not at all resemble the one we are used to. It’s hot. It’s very hot, and that the classes begin early in the morning is only partly helpful. It won’t be long until the sun collapses upon the sheet metal roof and the air becomes thick as the heat seizes the classrooms. This doesn’t make it any easier for the kids to keep properly sit and pay attention. Often they stand up, they may be visited by schoolmates from other grades, or become self-absorbed on their wooden desks and scream, they scream a lot. Generally kids like to scream and make noise, all over the world. In Nueva Mercedes they are not different; they are enthusiastic about sharing their feeling very loudly, whether is joy or sorrow. So after some days, I got used to hear the quiet voice of Miss Marta sneaking among the shouts, onomatopoeias and thuds on the tables of the kids. When I first meet that scenario I thought that chaos was ruling and nothing is working. But I realised later that it’s not exactly like this. The kids, as any other worldwide, they have in their inside the blaze of the curiosity, burning within them much more than any other. So when I stopped and started observing more thoroughly that apparent chaos, I realised that in between whistles they all shut up to listen what the teacher brought new today.

No one wants to be left behind; competition is a tenet here. So even the most unconcerned wants to understand what his or her schoolmate already did. Because what we understand is best learned and once you start enjoying learning is almost impossible to stop wanting to learn more. This is at least what encourages me on my way to school.

The same concept comes to my mind when we go across the gardens, delivering seeds, listening to Edwin explaining how and how not to plant radish and at what distance in the earth. Some women get discouraged, as productive gardens require time and care. But many other don’t; they keep the enthusiasm despite some failures, and this also can be seen in their faces when we praise their well done work, they reflect pride and this satisfaction is contagious. Well, those women welcome the sunrise already working, they take care of the children, the food, the house and they do tortillas for all the family surrounded by wood smoke. That’s why when I see a clean garden or when they ask for more seeds and advices to plant them, when they are not embarrassed to ask for help, then I think that something it’s going well and it is worth to keep on fighting for what I believe in. Maybe sometimes I am even too thrilled, but I confess in my head I imagine huge gardens occupying the surrounding of the houses, full of vegetables to feed the families… dreaming is for free.

There is much to be done in Nueva Mercedes, and it will still be when I will leave. But Li Chu'tam will be here to remember.....above all, everything that has been learned, what they learned and what I will learn, that will also stay. Because knowledge is nothing but that, a seed, which is almost nothing without some help, but if someone sows it and take care of it, it will grow and even put roots down, roots that will remain. We are working on it… 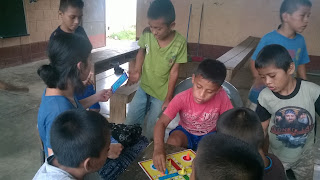