I will share a personal story with you because it reflects so well what we see here in NM.

Last weekend I (Filipa) went to Teleman, more specifically on Sunday. It is not an easy day to get transportation, so I waited for almost an hour for a pick up to take me. While I was waiting I got the company of this young boy, C. , he is 13 and attending 6 grado in Teleman. We had seen each other before as a friend is friend’s with his father, so he saw me waiting and started chatting. Firstly he asked me, perfect Spanish, were was I going, and living, were I was from….all of those regular ‘get to know you questions’. At a point I gave him a compliment for his Spanish level, further into the conversation I asked him about his q’eqchi, he didn’t speak q’eqchi. His sister is studying Medicine, his mother was a teacher at the local school and at least one of his uncles is a teacher.

He was complaining about the garbage in the floor and telling me he would like to study in Flores (up north) as the capital was too noisy and dangerous and he likes Flores. He practices sport at school and three times per week he has soccer training to play in the local football team.
‘Are there many girls in your class?’ –I asked him;
‘More than man!’ – he replied.

If we compare the reality of ‘the town’ to ‘the community we quickly realize that there is a bigger distance between them than the actual number of km separating both.

As I hopped on the pick-up that took me home, through the cloud of dust raising from the unpaved roads, I saw the dust as a metaphor to our conversation: exactly as the paved road ends by Teleman’s exit many other things end too. This boy is 11 km away from the kids at NM but they would probably have troubles communicating, as language levels, on both sides, do not meet. He is 13 and planning to study further, he has travelled, understands the importance of keeping nature clean and safe….Losing his native language is a pity, but at the end of the day he is the one getting to pursue his studies, having and giving better living standards to his family and dependants (hopefully!).
These two realities are a world away, but here in NM Li Ch’utams work tries to bring those worlds closer as we all deserve to live on the same one.

We have great news regarding a new volunteer joining the team early May, and thanks to our local volunteers there is also progress in finalizing the library, the activities are ongoing and we keep our weekly visits to the Kitchen Garden project, counting now with 15 active families and one family about to enter the project (next week). The results have been good though we have to insist in the watering, as it has been very hot and the seeds need extra water to grow. One of the families, Olga’s, appeared to be frustrated due to their first attempt and they told us they were waiting for the rains (may) to start planting. You can’t imagine how happy we were when we passed by theirs and noticed they had prepared and fenced the land and were willing to try again, Edwin helped them plant and now is just wait and water….. 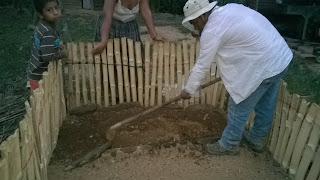 The 8th of May we will start a new activity: a cycle of info sessions given by qe’qchi speaking professionals on subjects that matter to the community: education, defence of nature, health, nutrition… are some of the foreseen topics.
With this pilot info session the 8th we will measure the communities’ interest and engagement, if it is positive then we can start planning the following ones.

Last time I wrote, I mentioned our current challenges with the IT classes, soon we will get another laptop and some usb sticks with a lighter version of the programme, this might allow us to recover a couple more of pcs and re-activate the PC related activities. I am not using the term ‘IT literacy’ because it is much more than that. Getting to know a little bit better the programme I realized how it can help kids developing their capacities and competencies, not only in using a computer but on the main-basic subjects – maths, reading, logic, physics…

Meanwhile we will keep meeting old and new partners strengthening our position and raising the changes for synergies in order to solve this computer issue.

Our radio silence was due to heavy work these weeks, plus a week off for Semana Santa (21-26th march) when the school was closed. The week before the school had just received missing school materials, the materials are delivered freely by the Government as families can’t afford to buy it. However it often happens that there is a delay, and school started around the 18th of January whilst this so needed materials were received two months after. A lot of catching up for the students!

On the school front we had to reduce a little our activities as we are low on staff, so until our team grows stronger we hold activities three times per week plus our weekly visits to the Kitchen Garden project and other interactions with the community.

Sudoko, recycling and manual works, as painting and doing origami, have keept us busy on the activities front whilst we are working on getting new laptops on one hand (immediate solution), to continue our precious IT classes, and to have an IT center on its way (long term project).The kids keep on asking for the IT classes and they know we are working on it. Searching for partners, donors, projects and entities that can reach out for us have taken up a chunk of my time. We are advancing with contacts and confident to have both immediate and long-term solutions figured out very soon.

There is also news of several members joining the team for the next months and this will allow the activities to go back to its regular flow, you will get the news and pics of the newly arrived first hand.
The Kitchen Garden project has registered encouraging results and the participants are enthusiastic. We have welcomed 7 new families this month, which take us up to 15 participating families, with one candidate family we will visit next week. Our weekly visits are extended to after sundown so that from around 4 PM to 6.30 PM we can cover the maximum number of families, keeping a rotation system so at least once in two weeks every family receives a visit. This has been proven a challenge but the support is essential, and not even the inevitable mosquito attacks in the kitchen gardens after sundown can keep us from getting where we need to be. Edwin, our local technical volunteer, also shows signs of no fatigue when it comes to instruct, help and assist, it is great to count on his support!

We have also identified two new grantees this month, so we are already supporting another student pursuing her studies in Diversificado (one of the only girls in the community reaching this level of education) and finalizing the procedure to assist another student who asked support to keep studying at Basico level.
This week will also be shorter as one of our co-funders and I am meeting some partners in Guatemala City, so we can advance on our partnerships and solutions, which will benefit the community in the longer term. I hope to shorty have good news on this to post.
On a last note, we had access to some interesting numbers on the last census (10.06.2015)…if you were re-directed here from our facebook post this is the end of your crusade! The communities of Nueva Mercedes and La ceiba (were we implement our projects) amount to 568 people, 106 families. Learning that our community has grown so much (our last numbers indicated 300/400 people) fills us up with energy so that our projects might reach more and more people who are interested in participating.
Posted by Li ch'utam at 12:54 PM No comments: